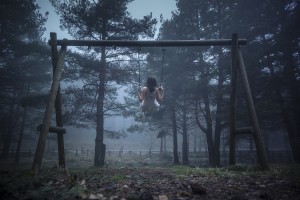 (Ana Sanfrutos from Circular Culture) Berlin, 18 October 2013 – Irene Cruz´s series “Aus heiterem Himmel” swings between forest, light, cold and being. Her photography introduces the human being in different relations to loneliness: prospective, sensuality, melancholy, reflection, getting lost and melting in the nature. The treatment of the light is absolutely perfect, the palette is soft and abrupt at the same time. As the translation that the dictionary give us for “Aus heiterem Himmel”, “Out of the blue”, unexpected, strange, going out of the blue into something else.

The mist, the trees, and the mysterious girl caught in motion, hiding her face from us, is reminiscent of the movies from Lars Von Trier. As scary and intriguing as the cursed forests of Lynch´s Twin Peaks.
The nature in general and the misty landscapes of forests at twilight is a classic image of the German Romanticism and also the powerful image of the Heideggerian being. Irene´s backgroung and interesses had lead her to this search through the paths of unknown forests.

Irene Cruz www.irenecruz.com (Madrid, 1987) has a masters in photography and art. She had several exhibitions in Spain and Germany and won some renowned prizes as the accésit in Fototalentos of Banco Santander foundation.

The Video-Art will be played in loop during the night of the festival, November the 2nd the photo exhibition will stay until the 22nd November.
This project is a collaboration between Art und Weise Kunstraum und Heilbar and Circular Culture for the Festival for culture and art in Neukölln “Nacht und Nebel”.

“The key of this project belongs to what is expressed in the English word “liminal”- referring either to take up a certain position at the very beginning of a process or being at both sides of a border or threshold at the same time. That is to say, to be between night and day, between calm and restlessness. However, it is not a limit. It is a road, a bridge to cross. Everything must flow or must have flown previously. The forest stands as a metaphor of nature in general. I’m making reference here to Baruch Spinoza’s words: “Of everything whatsoever a cause or reason must be assigned, either for its existence, or for its non-existence—e.g. if a triangle exist, a reason or cause must be granted for its existence ; if, on the contrary, it does not exist, a cause must also be granted, which prevents it from existing, (…)” 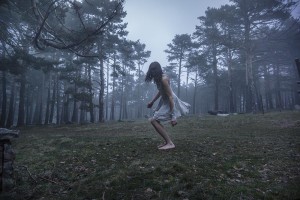 “The audiovisual work of Irene Cruz together with the chosen texts
to explain them invites us to think about our own vital
boundaries. An immersion into the unexplored territories between
light and darkness, a journey to travel with her through the
instants when the day turn mysterious night.
An invitation to cross the border between magic and reality,
between the seen and the sensed, the continuous movement of the
river and the strengthening stillness of the forest: the flow of
the childish swing and the ghost of what we can not see or feel:
that invisible thing that escape the frame.
Irene´s photos and video show a poetic and raw Naturalism. A
Baroque and misty Naturalism filtered by the visual metaphysic of
Lars Von Trier and the visual poetry of Terence Malick. As Emile
Zola said, naturalism can need no more than a fragment of nature
view through a temperament. Irene Cruz´s temperament in like an
anvil supporting the hammering of reality and turning the dreadful
pounding sound into a soft scream of reality and existential
emptiness.
The crazy but very lucid Salvador Dalí boast about his genuine
naturalism when saying that he painted barefoot to feel the earth
under his two feet. Irene Cruz photographs barefoot to feel the
moist soil of the forest during the enchanted time of the late
twilight.
Fly, flow, live and jump. To fall again heavily in the real soil,
to feel the moist of the mist, no longer Naturalist but turned
into Romantic German poetry.
Falling in the wet earth, barefoot and looking childish and
bewildered, looking into the dark forest, knowing than only
looking for it´s possible to find, even when there is no light.
Making mistakes and learning from them. Erasing the digital board
to re-write with an analogic pen: dying to be reborn, stronger and
more powerful. Understanding nature in the monist way of Spinoza,
as a totality submerged in Nature, a Nature that capture us and
make us think of the physical and heavy as it were part of the
soul.”